The LAMSIG TDSIG joint pre-conference event (PCE) took place on 9 April 2018 in Brighton. The PCE was structured around 4 15-minute talks addressing issues related to personalised professional development and whether this was in fact possible. This was followed by ‘Open Spaces’; a discussion activity where participants could raise issues related to their contexts and share with managers and teachers from around the globe in an informal conversation. An excellent lunch, a few coffee breaks and some delicious ice cream completed what was a very enjoyable and informative day. 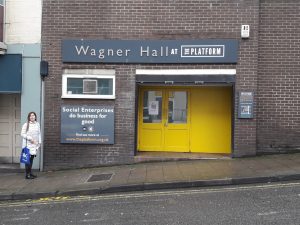 Fiona contextualised this session by looking at different platforms for PD. In the Australian context she highlighted Tearoom ‘tiny talks’, PD Fest – one day events, and MeetELT. For Peer-to-Peer platforms, she explained how Peer Partnerships and Pineapple charts can be applied for peer driven development. She then moved onto digital platforms and shared how UTS Insearch E-News, #AusELT and the ICTE-UQ Google+ communities work. This contextualisation then highlighted the importance of what she referred to as Passion Platforms where teachers follow their passion to self-determine their areas of interests and development. This focus allowed programs and processes to form platforms for personalised professional development which was exemplified by referring to the UTS action research program.

Clare then spoke about change management and the effect it has on personalised professional development. She highlighted the dynamic nature of quality in the classroom and teacher development stressing the fact that top down change isn’t effective, but that self-initiated change, such as the action research program mentioned above, leads to more long lasting effects. The objective of the leader should not be to design change processes, but to build a change platform from which anyone can initiate change, suggest solutions and launch experiments.

A step by step guide based on this talk would be: 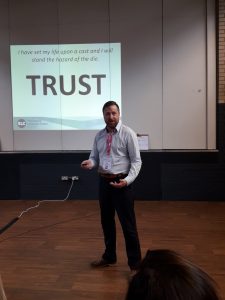 Ed Russell and the word of the day

Ed started his talk by describing the status quo in his current context related to Teacher Development. He showed the results of a survey indicating the preference for smaller group work rather than bigger training sessions. This was used to contextualize the importance of relationships over things, and leaders influencing the community to face its problems rather than following the leader’s vision. The context was then used to highlight a change in thinking by referring to teaching issues as puzzles rather than problems and addressing these puzzles with Professional Development Groups (PDGs) using a method called Cooperative development (CD). CD involves one person speaking about a problem and the other listening to understand rather than listening to give advice. Teachers then worked together in groups focusing on puzzles of interest to them and devised solutions. Despite difficulty in logging the activity for reporting sake, the uptake of and feedback on his program has been very positive. This level of trust in practitioners was the crux of the talk and a step by step guide based on this talk would be:

And from a management point of view – TRUST your teachers to develop if given the opportunity to do so. 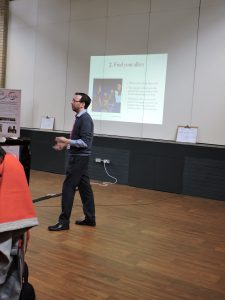 Liam started his talking by highlighting the importance of culture and saying that he was going to ask four questions related to culture change and development. He gave us time to speculate on the questions, but only asked them at the end. He stressed four issues during his talk. First, be sure to picture the change so that you know what it will look like. Find allies and be sure to look at the Silent Majority for allies as they are often not heard because they are not the most vocal. This term struck a chord with quite a few attendees as it refers to the majority of teachers who would get to work, do their jobs well, and then go home and have a life. The next issue was to spice it up with the focus not on getting everyone to do the same thing, but rather on getting everyone to do something. Finally, he focused on ‘Who you gonna call?’ with reference to employment and hiring practices and the importance of hiring people that will fit into your culture vision as well as empowering more experienced staff to work as mentors.

The four questions concluded and summarised the session:

Ania Kolbuszewska: What IS there to offer teachers in the happiest country on earth? 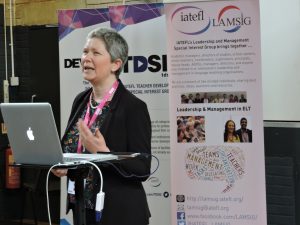 Ania started her talk by highlighting the irony of Switzerland being considered one of the world’s happiest countries, but also one of the suicide capitals of Europe. She explained her context specifically related to the different language teachers and the fact that there isn’t always a common language in the staffroom which highlights the importance of effective cross cultural communication and understanding. This was followed by highlighting how risk averse the Swiss can be and the baggage that we as teachers often carry with us. All of this contextualised the difficulties she has had in setting up CPD in her context as well as how CPD is viewed in different languages and the view that it is teacher training rather than individualised development. It is also problematic in that the goal of CPD is sometimes viewed as a benefit to the organisation rather than as a benefit to the teacher.

Her solutions to these problems were:

She concluded by stating that although the process is top down, it ensures that everyone is on the same page and CPD can therefore be discussed and talked about. 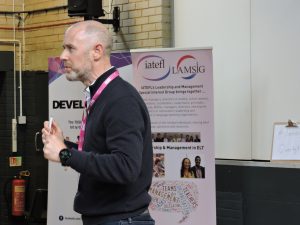 Josh Round setting up the Open Space

Attendees were given a few minutes to pose questions on Padlet or on paper and these were then grouped into centralised topics. The group self-divided into smaller discussion groups to discuss areas of interests to them. The first Open Spaces session had these 6 topics:

After lunch, there was a second Open Spaces session and as we delved deeper into issues, the topics changed and groups split into smaller groups to further explore issues related to the their own interests and contexts. While it would have been great to be part of every discussion, the well-organized feedback session meant that we had the opportunity to briefly hear what each group had discussed. 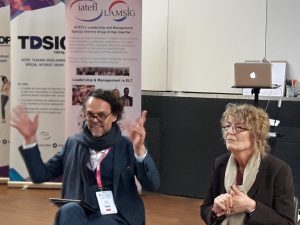 Christian and Jenny summing up

The feedback highlighted a few key areas that were nicely summarised by Christian Tiplady and Jenny Johnson before an informal vote on whether personalised professional development was indeed possible.

The only issue raised was the relevance of professional development to the strategic direction of the organisation, as it is possible to allow teaches to develop into professionals in areas that are not necessarily part of the organisation’s strategic plan. Overall, the feeling was that although teachers may need to be made aware of where the organisation is heading, the benefits of allowing for personalised professional development and allowing teachers to ‘just get on with it’ far outweighs the potential risks. A recurring theme was to make the resources (time, space and money) available and to trust teachers to develop, but to be sure that you are aware of potential pitfalls and plan to deal with these by managing the organizational 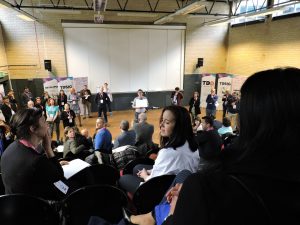 A view from the gallery

A really great day where everyone I had spoken to afterwards were very happy with the balance of input vs output and the freedom we had to change between groups. The short talks made it easy to spend 15 minutes paying attention to all the talks without feeling any ‘input fatigue.’ A big thank you to the two committees for putting it together, the speakers for four excellent sessions, and Trinity for the ice cream.

Two more blog posts written by participants of the day can be found here:

To find out how to become a member of LAMSIG, click here.

Academic managers, directors of studies, school owners, senior teachers, coordinators, supervisors, principals, deputy heads, ADOSs, managers, directors, and anyone else involved in or interested in leadership and management in language teaching organisations. We are a network of like minded individuals, sharing best practices, ideas, questions and resources.

Some of the topics that have come up in the last week Job descriptions for online teachers Some suggestions that were made:  Reword face to face teacher job descriptions Preparing and delivering lessons to improve Read more…

Subtitle: Maslow before Bloom Thanks everyone for another very supportive week on the Facebook group Language School Management in the time of Covid19. Thanks to everyone involved for all your tips, help, encouragement, empathy, and Read more…